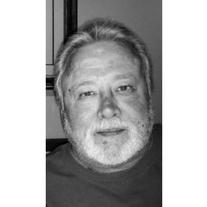 Robert William “Robin” Vannoy, 60, of Fairland, passed away Sunday, July 11, 2021, at University Heights Health and Living Center in Indianapolis. He was born on August 9, 1960, in Indianapolis, the son of Robert Bruce and Betty Jo (Amburgey) Vannoy. On October 5, 1991, he married his wife of 29 years, Kimmie Smith, and she survives. In addition to Kimmie, Robin is survived by his father of Fairland; daughter, Kristen Gilbert and husband, Kory, of Fairland; sons, Shawn Vannoy and fiance’, Cristina, of Greenwood, and Joshua Watson and wife, Jessica, of Franklin; brother, James Tracy Vannoy and wife, Sheryl, of Fountaintown; sister, Elizabeth A. Dewey and husband, Eric, of Indianapolis; grandchildren, Gavin and Grace; and several nieces and nephews. He was preceded in death by his mother. Robin graduated in 1978 from Shelbyville Baptist Academy. He was a member of Fairland Baptist Church. Robin was a CNC machinist and programmer, for over 25 years. He enjoyed reading westerns and sci-fi books. Robin also enjoyed outdoor activities. Robin loved his family and cherished the time he spent with them, especially his grandchildren. He also leaves behind his cats, Little Bit and Stinker. Graveside services will be at 1 p.m. Saturday, July 17, 2021, at Fairland Cemetery in Fairland. Services have been entrusted to Freeman Family Funeral Homes and Crematory, Carmony-Ewing Chapel, 819 S. Harrison St. in Shelbyville. Online condolences may be shared with Robin’s family at www.freemanfamilyfuneralhomes.com.
To order memorial trees or send flowers to the family in memory of Robert William Vannoy, please visit our flower store.