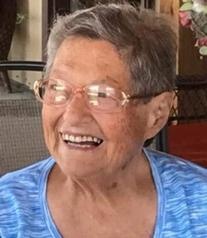 Rosemary Gunderman, 89, of Greenfield, passed away Wednesday, January 10, 2018 at the Indiana Masonic Home in Franklin. She was born July 13, 1928, in Indianapolis, the daughter of John E. and Mary E. (Foltz) Sinclair. On October 24, 1948, she married Robert G. Gunderman, and he preceded her in death on May 29, 2005. Rosemary is survived by her daughter, Karen Sue Gunderman and husband, Tim Slack, of Indianapolis; sons, Robert Scott Gunderman and Jean, of Indianapolis, and John David Gunderman and wife, Terri, of Greenfield; brother, John Steven Sinclair of Indianapolis; and her cat, Stitches. She was also preceded in death by her parents; and a sister, Martha Monroe. Rosemary graduated from Arsenal Tech High School in 1946. She was a bookkeeper for Gunderman Speed Shop, from 1969 until retiring in 1992. She had also worked in alterations at LS Ayers, she was a wonderful seamstress and sewing had been a thread throughout her life. Rosemary was a member of the Order of Eastern Star Morristown Chapter No. 316 and Patoka Valley Quilting Guild. She was the robe mother for Bethel 67 Cumberland Chapter of Job’s Daughters. She enjoyed cross stitching, quilting, gardening and reading. Rosemary cherished the time she spent with her loving family and they will be building “Rosie’s Garden” in memory of her life. Friends may gather from 1 to 3 p.m. Saturday, January 20, 2018 at Freeman Family Funeral Homes and Crematory, Carmony-Ewing Chapel, 819 S. Harrison St. in Shelbyville. A Celebration of Rosemary and Robert’s lives, including Eastern Star and Masonic Ritual, will begin at 3 p.m. at the funeral home, with Bill Farmer officiating. Military rites will be conducted by the local military committee. Inurnment will be at Washington Park East Cemetery in Indianapolis, at a later date. Memorial contributions may be made to the Hancock County Humane Society, 214 E. Main St., Greenfield, Indiana 46140 and SHC Cincinnati, 3229 Burnett Avenue, Cincinnati, Ohio 45229-3095 on memo line of check write "patient needs". Online condolences may be shared with Rosemary’s family at www.freemanfamilyfuneralhomes.com.
To order memorial trees or send flowers to the family in memory of Rosemary Gunderman, please visit our flower store.