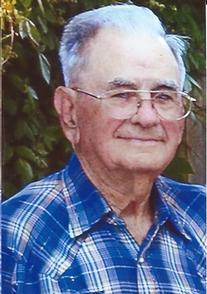 Royse E. Waltz, 92, of Fairland, a lifelong Shelby County resident, passed away Thursday, October 24, 2019 at Franciscan Health in Indianapolis. He was born May 1, 1927 in Bartholomew County, the son of Lawrence and Thelma (Teltoe) Waltz. On February 19, 1949, he married Doris Jean Hiner, and she preceded him in death on January 3, 2018. Royse is survived by his daughters, Judy Butts of Blue Ridge and Joyse Banister of Fairland; son-in-law, Bruce Banister of Waldron; grandchildren, Sarai Banister and Mark Hull, Amanda Gosser and husband, Brad, Jody Butts Dolder and husband, Matthew, and Jayme Royse Butts and wife, Kayla; and great-grandchildren, Ellie, Kentley Royse and Bailey Gosser, and Olivia Jean Dolder. In addition to Doris, Royse was preceded in death by his parents; and son-in-law, Danny Joe Butts. Royse graduated in 1945 from Fairland High School. In 2017, he was recognized by Triton Central High School as the oldest living Shelby County High School basketball player, winning three county tourneys during his high school career at Fairland. He was a U.S. Army veteran, serving during World War II. Royse was a lifelong farmer, he also drove a school bus for Fairland schools and worked at Western Electric for over 20 years. He had a passion for horses. He enjoyed spending his time racing harness ponies, showing miniature horses and racing standardbred race horses. Throughout the years he won many equine related awards. He also participated in the Indianapolis 500 parade with a team of horses, as well as, horse carriage weddings. Royse also leaves behind on the family farm, five special miniature horses and two alpacas. Visitation will be from 2 to 6 p.m. Sunday, October 27, 2019 at Freeman Family Funeral Homes and Crematory, Carmony-Ewing Chapel, 819 S. Harrison St. in Shelbyville. Funeral services will be at 10 a.m. Monday, October 28, 2019 at the funeral home, with Pastor Bruce Banister officiating. Interment will be at Fairland Cemetery in Fairland, with military graveside rites conducted by the local military committee. Memorial contributions may be made to Shelby County Fair Association, Inc., PO Box 977, Shelbyville, Indiana 46176. Online condolences may be shared with Royse’s family at www.freemanfamilyfuneralhomes.com.
To order memorial trees or send flowers to the family in memory of Royse E. Waltz, please visit our flower store.