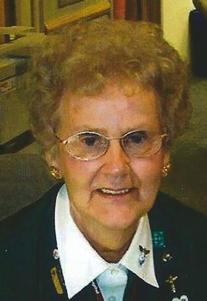 Ruth Ellen (Logan) Osborn, 86, of Morristown, passed away Friday, May 19, 2017 at Morristown Manor in Morristown. She was born July 5, 1930 in Rush County, the daughter of Ross and Roena (McMillin) Logan. On December 31, 1948, she married her husband of 68 years, Robert E. “Bob” Osborn, and he survives. Ruth is also survived by her daughters, Nancy I. Waybright and husband, Roger, of Ranson, West Virginia, Rebecca Ann “Becki” Brown and husband, Craig, of Shelbyville, Deborah Kay “Deb” Reed and husband, Keith, of Greensburg, and Rena Jo Beckner of Morristown; sisters, Phyllis Mahan and Helen Perkins, both of Rushville; sister-in-law, Imogene Logan of Rushville; grandchildren, Marc Waybright, Jennifer Burley, Kathy Dougherty, Kim Spindler, Corey Brown, Logen Adkins, Britney Jones, Justin Beckner and Jessica Berry; 23 great-grandchildren; and several nieces and nephews. Ruth was preceded in death by her parents; sister, Jerry White; brother, Harold L. Logan in 1963; and half-brother, Bill Logan. She graduated from Arlington High School in 1948. Ruth was a member of Morristown Christian Church. She grew up in Arlington, and then became a farm wife and homemaker. Later, she worked at National City Bank for four years, before retiring. Ruth was a volunteer at Major Hospital for 15 years. She was a member of the home economic club, Mother’s Night Out Club, and participated in the open class at the fair. Ruth led a bible study group at Morristown Manor. Visitation will be from 2 to 6 p.m. Sunday, May 21, 2017 at Morristown Christian Church, 209 S. Washington Street in Morristown. Funeral services will be at 10 a.m. Monday, May 22, 2017 at the church, with Pastor Fred Hickman officiating. Interment will be at Arlington East Hill Cemetery in Arlington. Services have been entrusted to Freeman Family Funeral Homes and Crematory, Frazier Chapel, 124 E. North St. in Morristown. Memorial contributions may be made to Morristown Christian Church, 209 S. Washington St. in Morristown.
To order memorial trees or send flowers to the family in memory of Ruth Ellen (Logan) Osborn, please visit our flower store.