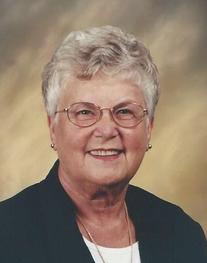 Shirley Lee “Mrs. O.” Oeffinger, 87, of Shelbyville passed away Monday, August 23, 2021, at her home. She was born March 15, 1934, in Canton, Ohio, the daughter of Lee A. Hanna and Virginia D. (Williams) Bennett. On March 26, 1954, she married Carl W. “Bill” Oeffinger, and he preceded her in death on August 3, 2016. Shirley is survived by her sons, David Oeffinger and Danny Oeffinger and wife, Mary, both of Shelbyville, William “Bill” Oeffinger and wife, Theresa, of Cynthiana, Kentucky; daughter, Diane McKee and husband, Ralph, of Fort Wayne; grandchildren, William “Bill” Oeffinger Jr. and wife, Kelli, Christy Lade and husband, Michael, Rebecca “Becca” Jackson and husband, Jeremy, Emily McKee, Michael “Mike” McKee and wife, Leslie, Kelly McKee, Elizabeth “Liz” Oeffinger and fiancé, Paul Renton, and Erica Oeffinger; and seven great-grandchildren. In addition to Bill, Shirley was preceded in death by her parents; granddaughter, Britni Oeffinger; and her step-father who raised her, Michael Bennett. Shirley graduated in 1952 from Lincoln High School in Canton, Ohio. She was an active member of the First Presbyterian Church, where she sang in the choir and served as a Deacon. Shirley was the assistant manager and then manager of Porter Pool for over 30 years, where she was instrumental in teaching thousands of children to swim throughout her career. Shirley also worked at Shelbyville High School as the pool supervisor from 1972 until retiring in 1999. While at SHS she taught lessons, directed the pool, and was the assistant swimming coach for both the boys and girls teams. She was affectionately known as “Mrs. O” by the many young people she touched throughout her careers. Shirley was also a member of Kappa Kappa Sigma Sorority. She was presented the key to the City of Shelbyville, for her many years of serving adults and children in the community. A gathering of friends will be from 1 to 3 p.m. Saturday, September 4, 2021, at First Presbyterian Church, 124 W. Broadway St., in Shelbyville. The Celebration of Shirley’s life will be at 3 p.m. Saturday at the church, with Rev. Mark Morningstar officiating. Services have been entrusted to Freeman Family Funeral Homes and Crematory, 819 S. Harrison St. in Shelbyville. Memorial contributions may be made to Shelbyville High School, 2003 S. Miller St., Shelbyville, Indiana 46176 or First Presbyterian Church. Online condolences may be shared with Shirley’s family at www.freemanfamilyfuneralhomes.com.
To order memorial trees or send flowers to the family in memory of Shirley Lee "Mrs. O" Oeffinger, please visit our flower store.