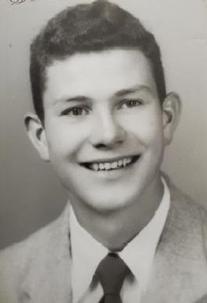 Stephen R. Blackburn passed away from natural causes at Ashford Place Health Campus in Shelbyville on February 14, 2021. He was born May 24, 1938 in Ohio, to James and Alice (McNeilan) Blackburn. He was preceded in death by his wife of 43 years, Janet (Sutyak) Blackburn. Stephen is survived by his sister, Peggy (Blackburn) Thomas and husband, Marlin; sisters-in-law, Elizabeth and Judy Blackburn; and several nieces and nephews. In addition to Janet, Stephen was preceded in death by his parents; brothers, Lawrence Blackburn, Tom Blackburn and Bill Blackburn; and sister, Patricia Schoentrup. Mr. Blackburn served in the US Army from 1959 to 1962, and was stationed in Germany. He received his B.S. degree in accounting. Stephen then began his varied career with the U.S. Government. He retired as a Branch Chief with the Defense Logistics Agency. Mr. Blackburn returned to Shelbyville in 2018. He was a very much loved brother and uncle. Family meant the world to Stephen. Visitation will be from 10:30 to 11:30 a.m. Saturday, February 20, 2021, at Freeman Family Funeral Homes and Crematory, Carmony-Ewing Chapel, 819 S. Harrison St. in Shelbyville. Funeral services will be at 11:30 a.m. Saturday at the funeral home, with Rev. Bob Campbell officiating. Interment will be at Boggstown Cemetery, with military rites conducted by the local military committee. Online condolences may be shared with Stephen’s family at www.freemanfamilyfuneralhomes.com.
To order memorial trees or send flowers to the family in memory of Stephen R. Blackburn, please visit our flower store.