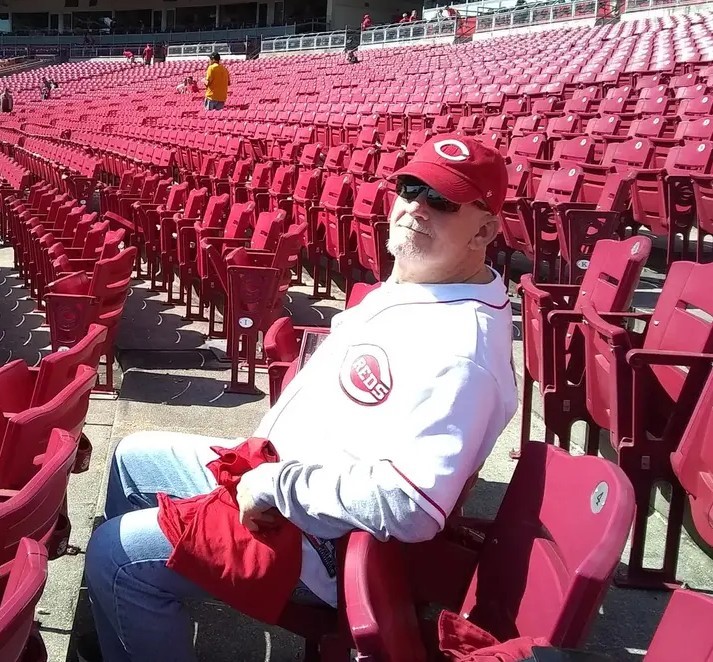 Timothy H. Libert, 62, was escorted by Angels into Heaven on Sunday May 22, 2022. Tim was born August 16, 1959 to Rev. and Mrs. Harold and Jerri Libert in Columbus, Ohio. The Libert family soon settled in Union City, Indiana

Union City was thriving at the time and offered Tim many areas of exploration. As a juvenile he hopped freight trains and went exploring other towns, he climbed water towers and granaries, too! He excelled in Union City Community School Athletics. Tim was especially known for his speed on the football and track fields. At one point he ended up in Indianapolis, Indiana for Olympic track trials. He could also be found as the local pool lifeguard.

Tim was a natural craftsman always striving to construct or improve upon the matter he was working with. This may be part of what landed him in a Purdue University Think Tank. His personal joys included music for which he had an eclectic taste, crafting guitars, a love of dogs, studying history and our Constitution, Bible study, and astronomy for which he so enjoyed traveling to areas still protected from light pollution.

While working at Corning Glass of Greenville, Ohio Tim attended Purdue University’s Engineering night school program on the Indiana University East Campus. It was the first day of Fall 1984 classes when Tim met Susie Miller—the rest is history. They were married by Tim’s Dad two years later on August 9, 1986.

Tim obtained Purdue University’s Bachelor of Science Mechanical Engineering Technology Degree in 1987 on the West Lafayette Campus. Douglas Aircraft of Long Beach, CA beaconed Tim. He held various positions within the aerospace company, but the MD80 was his aircraft. He so enjoyed the California life of friendly people, surfing amongst dolphins, snow skiing, and both Anaheim Angels and Los Angeles Dodgers games. It was the perfect setting for the explorer in him.

Upon returning to the Midwest, Tim returned to glass industry work in Northern Ohio. The rural environment gave way to new explorations. Tim was so pleased the day he located an endangered Eagle and consulted the local Heidelberg College Ornithologist. His avian interest was peaked forevermore. Further enjoyment came from fishing and target practice at the nearby Isaac Walton League. Eventually settling in Shelbyville, Indiana Tim continued within the glass manufacturing industry. Work brought travels to both Alabama and St. Louis. It was on one such trip he met a young woman and they talked music as they sat awaiting flights. The young lady went on to fame as Avril Lavigne.

Tim was very influenced by music. Imagine walking around your childhood neighborhood and hanging out with garage band performers like The McCoy’s with Rick Zerringer (now Derringer), playing basketball with Eddie Money, or hanging out with Steve Miller. Tim always maintained a special fondness for The Blue’s. His own last gig was playing in the Lewis Creek Baptist Church Band. He loved being able to share and give back in this way.

Tim’s long-standing desire was to be cremated and simply returned to the Earth. Therefore, no services will ensue. Should you wish to honor Tim’s memory, you may read and reflect on a Bible passage, listen to a great tune, go fishing, pick a star-filled night and explore, watch a Cincinnati Red’s game, or motorcyclist’s you can take it to the country and enjoy the ride.

Daniel 2: 20-23 (NIV) and said: “Praise be to the name of God for ever and ever; wisdom and power are his. He changes times and seasons; he deposes kings and raises up others. He gives wisdom to the wise and knowledge to the discerning. He reveals deep and hidden things; he knows what lies in darkness, and light dwells with him.

Online condolences may be shared with Tim’s family at www.freemanfamilyfuneralhomes.com.

To order memorial trees or send flowers to the family in memory of Timothy H. Libert, please visit our flower store.
Send a Sympathy Card