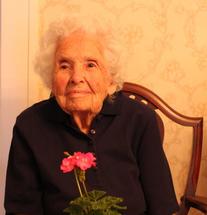 Velma Irene (Davis) Wortman, 107, of Morristown, passed away Monday, July 9, 2018 at her residence. She was born October 14, 1910 in Hancock County, the daughter of Horatio and Venice (Curry) Davis. On August 31, 1930, she married Lyall E. Wortman, and he preceded her in death on December 30, 1956. Velma is survived by her children, James Robert “Bob” Wortman of Morristown, Janet Wortman of Morristown (formerly of Richmond), Dr. Donald Wortman and wife, Maria, of Rockville, Maryland, and William Keith “Bill” Wortman and wife, Faye, of Evansville; sister, Helen Jean Kilby of Southport; grandchildren, Lisa Bridges and husband, Steve, Brian Wortman and wife, Yvonne, Deborah Towner and husband, Fred, Melissa DuBoyce, Gretchen Snelling and husband, Greg, and John Wortman and wife, Sandra; and several great-grandchildren and great-great-grandchildren. In addition to Lyall, Velma was preceded in death by her parents; daughter-in-law, Sue Ann Wortman; brothers, George Davis, John Kenneth Davis and Leon Davis; grandson, Jay Wortman; and grandson-in-law, Joe DuBoyce. Velma graduated from Westland High School in 1927, completed her undergraduate at Butler University in Indianapolis. She received her Bachelor’s in education, and her Master’s degree in education and library science. She was formerly a member of the Friends Church at Westland. After moving to Morristown, she became an active member of the Morristown United Methodist Church, where she played the organ and piano, taught Sunday school, directed Vacation Bible School and served on various committees. For several years, she played the organ, while her granddaughter, Lisa played the piano at church services. Velma began her teaching career before her 19th birthday teaching in Gary for two years. She retired from Morristown High School in 1977, where she was an English teacher and full-time librarian. She was very active in numerous community clubs including, being an 86-year member of the Morristown Order of Eastern Star, where she was past matron; Mu Beta, a literary organization in which members review books each month; and Merry Mixers Home Extension Club. Velma is a past state president of the Delta Kappa Gamma Society International and former editor of the Hoosier Newsette, a women educators’ honorary organization. She also served on the organization’s international board and committees and helped establish a chapter at Upsala University in Upsala, Sweden. Velma served as chapter president in the honorary Alpha Tau chapter that serves women educators in Shelby and Johnson counties. Velma loved to travel and took a variety of trips including, visiting nearly every European country. She had also been to the Holy Land, Turkey, Germany, Australia, New Zealand, Russia and Rome. Visitation will be from 4 to 8 p.m. Thursday, July 12, 2018 at Morristown United Methodist Church, 221 S. Washington St. in Morristown, with Eastern Star rites at 7:30 p.m.; and from 9:30 to 10 a.m. Friday, July 13, 2018 at the church. Funeral services will be at 10 a.m. Friday at the church. Interment will be at Asbury Cemetery in Morristown. Services have been entrusted to Freeman Family Funeral Homes and Crematory, 124 E. North St. in Morristown. Memorial contributions may be made to the Morristown United Methodist Church or Sue Ann Wortman Cancer Center, in care of Hancock Health Foundation, 801 N. State St., Greenfield, IN 46140. Online condolences may be shared with Velma’s family at www.freemanfamilyfuneralhomes.com.
To order memorial trees or send flowers to the family in memory of Velma Irene (Davis) Wortman, please visit our flower store.