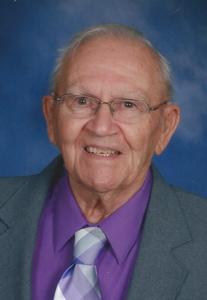 Wallace F. Harrell, 96, of Franklin, formerly of Shelbyville, passed away Thursday, December 23, 2021, at Community South Hospital in Indianapolis. He finally realized his long-held desire of joining Lorene, his beloved wife of 75 years, in eternity. He was born at home on a snowy October 18, 1925, in Fairland, the son of Earl and Dorothy (Tucker) Harrell. He married Lorene Kingery on December 9, 1945, and she preceded him in death on March 22, 2020. Wallace is survived by his daughters, Barbara (BJ) Fairchild-Newman, Indianapolis, and Joyce Shaffer and husband Tom, Walterboro, South Carolina. Grandchildren include Andrew Shaffer, New York; Lauren Shaffer McKinney and fiance Chris Reinhardt, Asheville, North Carolina; Pamela Fairchild-Clark and husband Cody, Indianapolis; and Joseph Fairchild, Indianapolis. His great-grandchildren are Heidi and Harrison Clark and Bryce and Ford McKinney. In addition to Lorene and his parents, Wallace was preceded in death by his son, Larry Harrell of California and his brother, Herman Harrell, of Mississippi. Wallace graduated from Waldron High School in 1943 and started a machinist apprenticeship at Bridgeport Brass Company in Indianapolis. He joined the Army in 1944 and served in Germany during World War II. After returning from the war, he worked as a skilled machinist while raising his family, retiring from the Ransburg Corporation in Indianapolis in 1986. Wallace was a Past Master of the Sugar Creek Lodge #279 F&AM in Fairland, and he and Lorene lived in Fairland for 40 years before moving to Shelbyville in 1994. They moved to Otterbein Franklin Senior Life Community in 2014, where he lived until his death. Wallace and his wife were members of the Bears of Blue River Camping Club for many years, and they enjoyed traveling throughout the United States in their motorhome. Wallace was a member of Fairland United Methodist Church for 35 years and proudly considered himself a born-again Christian. He was also a member of Town and Country Christian Church in Shelbyville and Grace United Methodist Church in Franklin. Visitation is from noon to 1 pm on Tuesday, December 28, 2021, at Freeman Family Funeral Homes and Crematory, Carmony-Ewing Chapel, 819 S. Harrison St., Shelbyville. Funeral services will follow at 1 pm at the funeral home with Pastor Andy Kinsey of Grace United Methodist Church officiating. Interment will be at Forest Hill Cemetery in Shelbyville. Memorial contributions may be made to Grace United Methodist Church, 1300 E. Adams Dr., Franklin, Indiana 46131.
To order memorial trees or send flowers to the family in memory of Wallace F. Harrell, please visit our flower store.