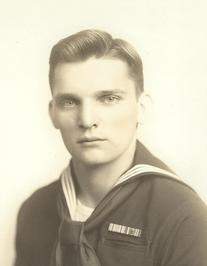 William Edward “Bill” Springer, 93, of Indianapolis, passed away Friday, June 29, 2018 at his residence. He was born December 13, 1924, in Gwynneville, the son of Jesse Cleveland and Elsie Evelyn (Andrews) Springer. On August 12, 1961, he married his wife of 56 years, Eleanora Jean “Norie” (Peebles) Springer, and she survives. In addition to Norie, Bill is survived by his brother, Gene Paul Springer and wife, Mary, of McCordsville; sisters-in-law; brothers-in-law; nieces and nephews; and great-nieces and great-nephews. He was preceded in death by his parents. Bill graduated from Morristown High School in 1942. He was a US Navy veteran serving, during World War II. He was onboard the USS Marblehead CL12, from June of 1942 to December of 1945. Bill retired as an equipment specialist for the US Government at Fort Benjamin Harrison in 1980, with 32 years of service. He was a 50-year member of the Morristown Masonic Lodge No. 193 F&AM and American Legion Post No. 102. He was also a member of Knights Templar and the Moose Lodge. Visitation will be from 5 to 8 pm Monday, July 2, 2018 at Freeman Family Funeral Homes and Crematory, Frazier Chapel, 124 E. North St. in Morristown, with the Masonic ritual recited at 7:30 pm. Funeral services will be at 10 am Tuesday, July 3, 2018 at the funeral home, with Bill Farmer officiating. Interment will be at Asbury Cemetery in Morristown. Memorial contributions may be made to the Office of Development, Shriners Hospitals for Children, 2900 Rocky Point Drive, Tampa, Florida 33607 or St. Jude Children’s Research Hospital, 501 St. Jude Place, Memphis, Tennessee 38105. Online condolences may be shared with Bill’s family at www.freemanfamilyfuneralhomes.com.
To order memorial trees or send flowers to the family in memory of William Edward "Bill" Springer, please visit our flower store.