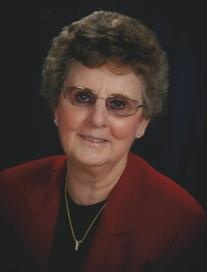 Wilma Barrett Padrick, 85, of New Palestine, passed away Sunday, January 9, 2022, at Otterbein Franklin SeniorLife Community. She was born October 27, 1936, in Shelby County, the daughter of Virgil and Goldie (Hickman) McCalip. On September 26, 1954, she married Charles “Ray” Barrett, and he preceded her in death in October of 1990. She married James D. Padrick on March 22, 1992, and he survives. In addition to James, Wilma is survived by her son, Brian “Keith” Barrett, of Pleasantview; daughter, Pamela L. Webb and husband, Ralph, of Lawrence; step-children, Timothy Lee Padrick of Indianapolis, and Lea Ann Padrick of Greenwood; sister, Carole Weaver and husband, David, of Carmel; grandchildren, Anna Barrett, William Barrett and wife, Taylor, Adrien Barrett, Ellie Stanoch and Betsy Castro; and seven great-grandchildren. In addition to Ray, Wilma was preceded in death by her parents; and brother, Kenneth McCalip. Wilma graduated in 1954 from Moral Township High School. She and her husband, Ray, were dairy farmers in Moral Township for 36 years, until retiring in 1990. Wilma loved her family and enjoyed creating a warm loving home for them. Private family graveside services will be conducted at New Palestine Cemetery. Services have been entrusted to Freeman Family Funeral Homes and Crematory, 819 S. Harrison St. in Shelbyville. Memorial contributions may be made to the Cancer Association of Shelby County, PO Box 844, Shelbyville, Indiana 46176. Online condolences may be shared with Wilma’s family at www.freemanfamilyfuneralhomes.com.
To order memorial trees or send flowers to the family in memory of Wilma Barrett Padrick, please visit our flower store.