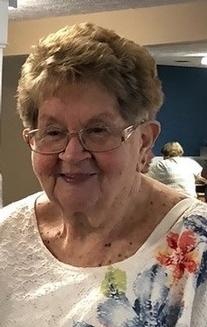 Wilma Blanche Hart, 86, of Morristown passed away Thursday, May 20, 2021, at her home. She was born September 16, 1934, in the Bronx, New York, the daughter of William and Mildred (Blueher) Moore. On January 11, 1958, she married David Hart, and he preceded her in death on August 14, 2016. Wilma is survived by her daughters, Cathi St. John and husband, Will, of Rushville, Kristi Hart of Indianapolis, and Lori Stier and husband, Daniel, of Franklin; grandchildren, Matthew St. John, David Stier, Michael St. John and Abby Stier; and numerous nieces and nephews. In addition to David, Wilma was preceded in death by her parents; brothers, William “Billy” Moore, Richard “Dick” Moore and Walter Moore; and sister, Betty Brown. Wilma graduated in 1954 from Pendleton High School. She was a member of the Morristown Christian Church. Wilma was a homemaker, she also worked for the United States Postal Service as a clerk, retiring in 1996, with 18 years of service. She enjoyed sewing, knitting, shopping and tending to her flowers. Wilma also enjoyed cooking and was well known for her “Aunt Wilma’s Peanut Brittle”. She was a great supervisor for any family project. Wilma loved to spend time with her friends and family, especially her grandchildren. Visitation will be from 4 to 8 p.m. Wednesday, May 26, 2021, at Freeman Family Funeral Homes and Crematory, Frazier Chapel, 124 E. North St. in Morristown. Funeral services will be at 10 a.m. Thursday, May 27, 2021, at the funeral home, with Fred Hickman and Bill Farmer officiating. Interment will be at Asbury Cemetery in Morristown. Memorial contributions may be made to the Morristown Christian Church, 209 S. Washington St., Morristown, Indiana 46161. Online condolences may be shared with Wilma’s family at www.freemanfamilyfuneralhomes.com.
To order memorial trees or send flowers to the family in memory of Wilma Blanche Hart, please visit our flower store.